Apple Inc is one of the most succesful global companies in our lifetime, achieving leading market dominance in many markets and is huge considering the narrow spectrum of products that it sells.  so what can we learn from their strategy over the past several years?  In an article by Loizos Heracleous of Warwick Business School, he calls it Apple’s Quantum Strategy. He explains “Conventional wisdom – most famously set out by Michael Porter – holds that such strategies would be impossible to achieve in a long-term, sustainable timeframe because they entail mutually contradictory investments and organisational processes; and that companies that try to achieve them would end up “stuck in the middle”, without any competitive advantage – a position that has gradually become strategic orthodoxy. It is said that companies that achieve such strategy can only do so temporarily, and only if competitors are themselves stuck in the middle, having achieved neither cost leadership nor differentiation; if cost is strongly affected by market share and inter-company relationships; or if a firm pioneers a major technological or process innovation. Such advantages would swiftly be copied by competitors however, leading to the need for firms to eventually make a clear choice about which generic strategy to follow, and conf igure  their organisation accordingly to implement it.”

Great strategic success comes when organisations can succesfully compete on different levels at the same time – which is very dificult to achieve, especially in a consistent and sustained manner.

He goes on to assert “Apple’s approach to differentiation is exemplary. It focuses on developing innovation capability through having the best people and pushing them hard, within a corporate culture where innovation is second nature. Add to this the “deep collaboration” approach made possible by the fact that Apple’s innovation is centralised in a single physical space – its campus in California – and you have an innovation hotbed. Buttress your market presence through clever, contrarian maverick branding, supported by actually coming up with radically new products, and you can develop a cult following. Control the customer experience and create barriers to entry for competitors and barriers to exit for customers through developing constellations rather than stand-along products, and you can charge premium prices with near impunity. Have a courageous, eccentric, genius, driven leader who takes the tough decisions and makes the difficult choices associated with the above, and you have a recipe for success. Apple’s gross margin in 2011 was 40.5 per cent and net margin was
23.9 per cent.” 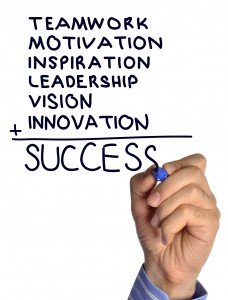 What strategies can you use in your own business to gain similar competitive advantage?

Where can you research more on Quantum Strategy and multiple focus strategy?  Here are some suggestions: