I often ask leaders in coaching sessions to refelct on their own experiences of being led and how they have responded to different leadership styles through their career.  This is often a very enlightening debate and realisation of the power of a leader’s style on the emotions and engagement of the team. Those who have experienced ‘Trustworthy Leadership’ know what I am talking about and what it is like to be a part of that team or organisation.  This often leads to insightful discussion around what qualities lead to a leader being effective (trustworthy).

The CIPD have conducted a series of research papers looking at the issues surrounding leadership and trust, their more recent report focussing on the experiences of reports to those leaders.  They highlight common responses that could be associated with building trust in organisations and therefore are worthy of review by any manager who wishes to improve their traction with the team.

The report reaffirms that the four key principles of trust are ability, benevolence, integrity, predictability – by simply focusing on these four areas, a leader builds qualities that gain greater trust relationships.  This most recent report goes on to suggest four areas that leader’s 360s (staff, colleagues and superiors) have highlighted specifically associated with their entrusted leader.

1. They put relationships at the heart of everything they do

“I don’t just chair things with my managers at the next level. I will go and meet teams of people. They want to see you in operation at different levels and I want to learn from them and hear from them.”

“I’ve seen examples of that from the work that I’ve done with her – she’s gone back and checked the regulations where she’s unsure, she’s not relying solely on her memory, she’ll go back and check stuff. She’s prepared to admit when she doesn’t know and go find out.”

3. They recognise and develop uniqueness

“He gives people that belief that they can achieve things and that they can progress from where they are. He gives everybody an opportunity, especially when he looks at their skills. Some people are good on computers and things like that, so he’ll put them doing whatever as a charge hand.”

“The honesty for me is really important because I want her to also champion me and develop me and I would like to have – if there’s something that actually I could be developing further I’d like to have that honest feedback or I’d like her to say, “Actually you could have approached that in a different way to have got this outcome”, or whatever it may well be I would like – and I know that she will do that.”

4. They Engage with real people

“He worked very hard to get my trust, and I really respected that. Harder than I worked to get his. But once we got to that point, then it became a very open relationship. When he would know I would be frustrated and other things and he would take extra time to, “Let’s get some time off site. Let’s talk through some things.” We did not get into business all the time. He allowed me into his personal side, which I think is important when you are really trusting someone, they open up on a personal side.”

“He is really consistent and you know exactly where you are with him but occasionally there have been times where things out of our control have happened and, like most humans, he will react but that doesn’t make me trust him any less, it just makes me think he is human.” 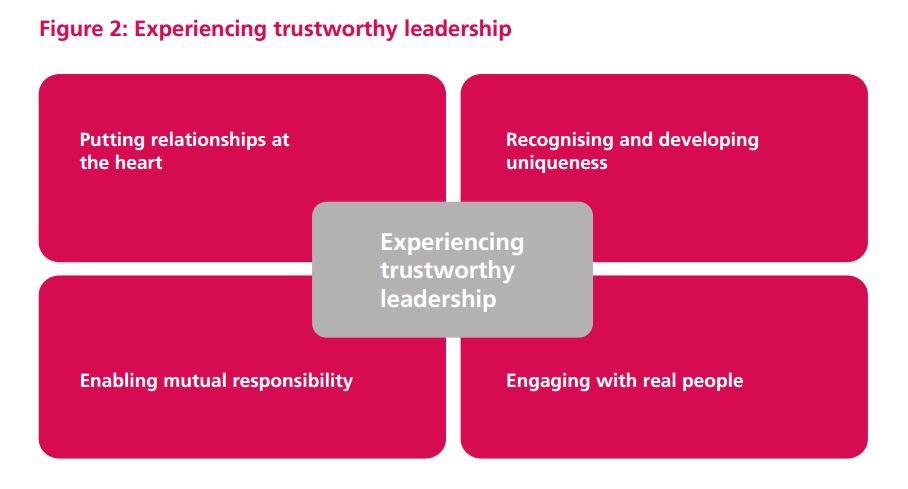 -Do I have sufficient relationships of trust with my 360s?

-How might I work to improve my levels of trust in my organisation or team?

I have seen the value trust brings to an organisation or team in speeding up processes and removing friction thus allowing greater productivity and committment.  Leaders set the tone and enable ‘the space of trust’ through their actions so people can flourish and loyalty to deepen.

Previous articleGame Changing: Why Use An Executive Coach?